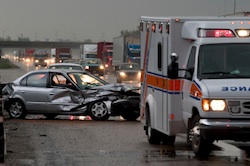 In New York, vehicular manslaughter is a felony that is charged when intoxicated and drug impaired drivers cause the death of others. These are serious charges for which you’ll need immediate, experienced, and diligent legal representation as you are facing potential jail time, significant loss of driving privileges, fines, and the combined effect on your personal life and employment—we are here to help. If you or a loved one is charged with a DWI involving another’s death, give seasoned White Plains vehicular manslaughter lawyer Mark A. Siesel a call. We have decades of experience raising procedural and substantive defenses.

Under section 125.12 of the New York State Penal Law, the court will find a person guilty of vehicular manslaughter in the second degree, a Class D Felony, if the prosecution can establish beyond a reasonable doubt that they caused the death of another person and one of the following circumstances exist:

If you or a loved one was charged with a DWI or traffic crime that resulted in someone’s death you should call seasoned White Plains vehicular manslaughter attorney Mark A. Siesel. Mr. Siesel has more than three decades of experience represents clients in Brooklyn, Queens, and the Bronx, along with Westchester, Putnam, Kings, Orange, Dutchess, Sullivan, Rockland, Bronx, and Ulster Counties. Please contact us at (914) 428-7386 or complete our online form for experienced, knowledgeable, and dedicated legal representation.